Listen to the audio version of this story. For more, subscribe to our podcast.

The door to the walk-in cooler at Ashland Addison Florist Co. opens with a quiet whoosh. It’s the week before Mother’s Day, and the cooler is a fragrant riot of color, with buckets of lush peonies, upright hyacinths, and slender green cymbidium orchids filling the shelves. The flowers have traveled mostly from South America and Europe, and they’re in that near-magical stage perfect for Mother’s Day bouquets, wedding centerpieces and sympathy arrangements: freshly cut, yet primed to bloom fully by the time they arrive at their recipient.

There’s an inescapable fragility to the floral business. As a natural product, a flower is subject to the unpredictable whims of weather, and it begins dying once its stem is cut. The industry revolves around prolonging the inevitable until the flowers get to their final destination. This was the case in the 1930s, when Roy Sheffield, founder of Ashland Addison, got his start transporting blooms from local growers to wholesalers in Chicago. And it’s an even bigger logistical hurdle now that supply chains stretch across the globe, with South American farms providing most of the flowers that end up in the United States.

“It’s a tough business day-to-day because every day is different—we never know what orders we’re going to need to fill,” says Justin Sheffield, the fourth generation to work at Ashland Addison. “Every day is a challenge, trying to meet your demand, and take care of your customers and not overbuy on your product.”

The Sheffields have spent eight decades learning how to efficiently manage a business in which the core product is perishable, and they’ve built their company to a size that gives them more control over their costs. Bill Sheffield Sr., Roy’s son, started buying flowers directly from Miami-based importers in the 1970s; the blooms still travel in refrigerated trucks from Miami, the way station for the majority of flowers sold in the United States, to Ashland Addison’s central design center. The business, which operates four retail stores in the Chicago area, also relies on years of experience to handle seasonal spikes like Valentine’s Day, Mother’s Day and the month of December. The Sheffields know, for example, that a midweek February 14 will be busier than one that lands on a weekend, when Valentine’s Day spending tips in favor of restaurants rather than florist shops. Ashland Addison sells about 25,000 roses each Valentine’s Day, and all of them must get delivered on a single day.

It’s a tough business day-to-day because every day is different—we never know what orders we’re going to need to fill.

“I’ve been through it six times full-time now, but my dad and my uncle have been through it dozens and dozens of times, so we get a feel for it,” Justin says. His father, Bill Jr., recently retired from Ashland Addison, leaving him and Chris Sheffield, Bill Jr.’s younger brother, in charge. “We can go back several years and look at the history of what people have ordered. And I think maybe because of our size…we can really see trends in what people are ordering: People aren’t ordering this [product] as much, people are ordering more red roses or more pink roses. We take that all into account to try to get those numbers as close as we can so that we’re not overbuying or underbuying.”

Mother’s Day historically draws even more business than Valentine’s Day. But while both occasions are high-intensity periods for Ashland Addison, requiring preparation and finely choreographed routines of filling and delivering orders under deadline pressure, Mother’s Day is generally more relaxed. Unlike Valentine’s Day, which is overwhelmingly dominated by roses, orders are varied, so the company isn’t bound to a single type of flower and can negotiate deals from suppliers on certain blooms. This year, Ashland Addison ran a special on pink and white Oriental lilies. Another advantage of Mother’s Day: Deliveries are spread out during the last couple days of the week. Customers also seem to be more relaxed; Chris Sheffield posits that Mother’s Day is less emotionally fraught than Valentine’s Day for many people.

It takes little to persuade consumers to buy flowers for Valentine’s Day or Mother’s Day, which have long been associated with floral gifts. The challenge for a florist like Ashland Addison is getting its customers to make additional purchases, even if it’s just one more time a year—and to stand out among the sea of online retailers. American spending on flowers and related items, like potted plants and foliage, has hovered around $26 billion for the past six years, according to the Society of American Florists. Over roughly the same period, the number of retail florists has dropped; the U.S. Census counted about 14,600 such outlets in the country in 2012, down from 19,800 in 2007. The Sheffields have noticed this decline and believe they may have picked up some customers from the closure of competitors, but they’re still looking for new ways to grow their business, like cultivating relationships with event planners and restaurants.

“Most Americans who are buying flowers are still buying flowers, but the way they’re buying flowers is changing a little bit,” says Justin Sheffield. “The floral industry can be super competitive. You go online and there are 500 different options, and everyone’s trying to get your attention to click on their link…But we have a good established brand in Chicago. A lot of people know our name [and] know we’ve been around for 80-plus years, so that really helps us out.”

Ashland Addison runs a Mother’s Day deal every year where a purchase of an arrangement for that holiday comes with the delivery of a half-dozen roses on the mother’s birthday. To combat the expected dip in Valentine’s Day sales when the occasion falls on a weekend, the florist has promoted “Valentine’s Week” extras, like a free chocolate bar with a bouquet, to tempt customers into ordering and delivering flowers a few days before February 14.

About 70 percent of Ashland Addison’s revenue comes from individual purchases for everyday occasions, with weddings and events representing the remainder. This balance has served the company well. The daily orders ensure that Ashland Addison is buying regularly from its suppliers, who are then more inclined to fill a special or last-minute request, like the time the florist got a call from a customer wanting to send 2,000 roses to his girlfriend. Individual purchases also helped insulate the florist from the recent economic downturn, when corporate spending on events and gifts dropped. Its anchor retail location, which draws significant foot traffic, is its gift shop inside Prentice Women’s Hospital at Northwestern University. An Ashland Addison customer was the realtor for the space; as Chris Sheffield puts it, “luck and timing” took care of the rest. The company also owns a gift shop at Rush University Medical Center, a location made possible through another customer connection, as well as two other freestanding retail stores.

Even with the rise of online floral sales and the growth of publicly traded wire services like FTD that take orders and distribute them to networks of local florists, Ashland Addison continues to do most of its business over the phone. Most callers have already browsed the florist’s website and have something in mind, but want to talk to someone before making a decision. Giving flowers can be highly emotional, and this intensity also colors the interaction between florist and customer. The customer service representatives at Ashland Addison might speak with an ecstatic customer who just became a grandparent one minute, and a grieving family member ordering sympathy flowers the next. The staff provides tactful suggestions for customers who get writer’s block trying to dictate the card message. A flower order—choosing the right arrangement, writing the card—can offer a brief but revealing glimpse into someone’s personal life, and a florist is privy to these moments.

“It’s not shoes in a box that they’re ordering. It’s not a size,” says Chris Sheffield. “They want a little more input, and sometimes they just want a little more of an emotional response out of the person taking the order so they know they’re going in the right direction.”

When Roy Sheffield opened Ashland Addison in 1932, he was face to face with his customers every day, selling bouquets at the corner of Ashland Avenue and Addison Street in Chicago. He grew up at Angel Guardian Orphanage, an institution on Chicago’s north side that operated for more than 100 years before closing in 1974. The orphanage put him to work in its greenhouse; after he turned 18, he left Angel Guardian and got a job transporting flowers from local growers to wholesalers. He eventually saved enough money to buy his own delivery truck, but when the Great Depression hit, the growers paid him in flowers instead of cash. Sheffield made bouquets from those flowers and sold them first on the street corner, and later from a retail storefront on Ashland.

The Sheffields who have worked at Ashland Addison have experience in every aspect of the business: answering phones, designing floral arrangements, and making deliveries. Bill Jr. and Chris, who are nine years apart, spent childhood Saturdays with their father folding corsage boxes, sweeping floors and tagging along with delivery drivers. Justin started delivering flowers on Saturdays after he got his driver’s license.

Delivery is one of the most crucial parts of Ashland Addison’s business, and the company has expanded its geographic reach by organizing a pool of local florists who help each other make deliveries. Chris Sheffield’s father set up the system in the 1970s, formalizing what had been an ad-hoc system.

“My understanding from my dad was they would always swap stuff, whether it would be at busy holiday times, or maybe on Sundays when my father would have a delivery, say, to the south side and everything [else] was up on the north side,” Chris says. “He would reach out to a fellow florist: ‘Hey, could you deliver this one piece for me, and do you have anything in return up on the north side?’”

The original group consisted of five or six shops that met regularly. Eventually, two other co-ops in the Chicago area sprung up as well. The Sheffields later merged two of the pools into one operation, which today has about 40 members and is run daily out of the Ashland Addison design center. By midmorning on a weekday, a dozen vans are parked in neat lines outside the shipping and receiving entrance. Drivers bring deliveries into the warehouse—the floor of which is painted with numbered stalls corresponding to geographic zones—and leave their fruit baskets and plastic-wrapped arrangements in the correct slot. Justin keeps track of the swaps and handles the paperwork, making sure each shop is reimbursed for the deliveries it makes for other members.

“It’s really simple but it works really good, without a doubt,” Chris Sheffield says. “Once a florist belongs and sees the benefits of being able to take an order same-day and get it delivered 20 miles away at a very low cost, it’s a no-brainer for them.”

The Sheffields’ 80 years in the industry have also brought long-standing relationships with florists across the country on which Ashland Addison can call to fill orders for out-of-town deliveries—like getting flowers to Chris and Bill Jr.’s mother in Florida for Mother’s Day.

So what kind of arrangement does the mother of professional florists receive?

“I have no idea,” Chris says with a laugh, although he notes, “We got an email back that they were received and that she loved them…I’m the good customer. I left it in their capable hands.” 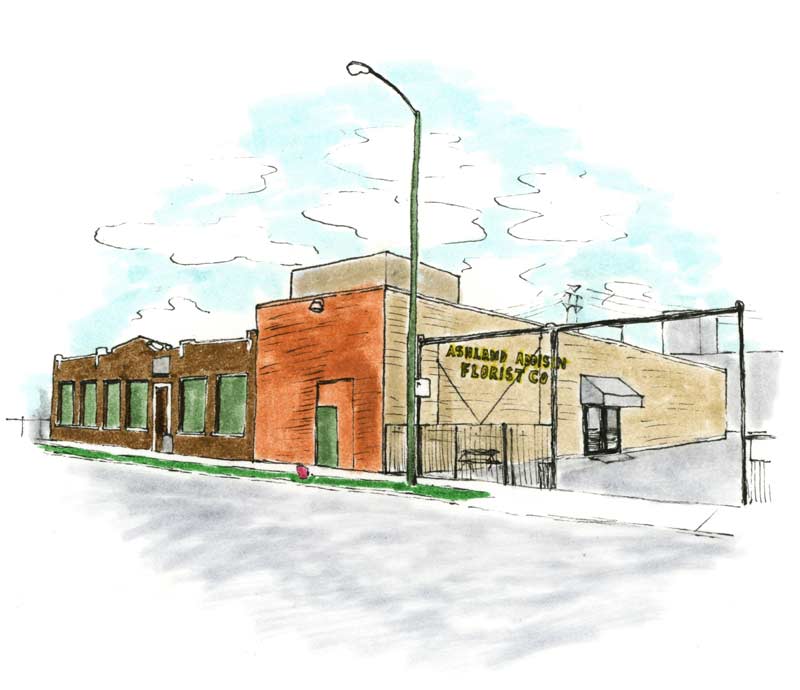 This profile on Ashland Addison Florist Co. was written by Wailin Wong, with additional editing by Sarah Morgan and Sarah Protzman Howlett. Art direction, design, and development was by Mig Reyes, with illustrations from Nate Otto, photography by Michael Berger, with audio and video by Shaun Hildner.